Prior to the arrival of LED, lighting was usually selected on the basis of wattage. However, the wattage is a unit for the energy consumption of a lamp, not the brightness. Still, wattage was a handy way to estimate the brightness of, for example, a light bulb. Since people pay their energy bill based on how many watt hours they have consumed, it was also a useful way to estimate how much a light bulb would cost.

The big difference with LED lighting is that there is no direct connection between energy consumption and brightness in the latter. For this reason lumens are needed to assess the brightness of a lamp. In this blog we tell you exactly how many lumens you need in the different rooms of your house. In addition, we have created a handy table in which you can see exactly how much watt a light bulb needs to produce a certain number of lumens. For example, an 8 watt LED is just as bright as a 60-watt light bulb.

Save energy with LED lamps

LED lamps are a breakthrough in light technology. In contrast to light bulbs, hardly any heat is produced by a LED lamp. As a result, an LED only needs a fraction of the energy to produce the same brightness. For example, a 6.5-watt LED lamp has the same brightness as a 50-watt halogen lamp. That is a saving on energy consumption of no less than 87%! And the developments do not stop. The LED lamp will become more efficient and economical in the coming years. LEDs also have a considerably longer lifespan. Some of them last up to 15 years longer than their predecessor.

Do you miss the cozy look of an old-fashioned light bulb? Then we have recently the perfect solution: the LED filament lamp. This is a LED light with the appearance of a light bulb. Economical, but still a lot of lumen!

In standard non-directional lamps, such as a candle or a spherical lamp, the number of lumen is a reflection of all the light emitted. With a directional lamp, such as a GU10 LED spot, this is somewhat misleading. For this reason, the European Union has introduced "useful lumens". This is the light that is emitted in a light cone of 90º (see picture). 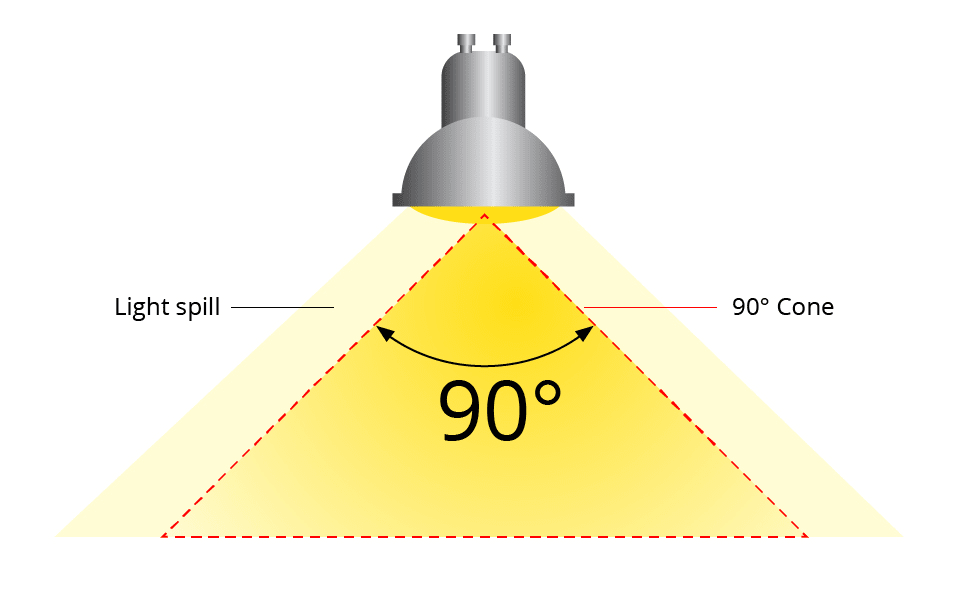 Use the table below to determine how many lumens you need to get the same brightness as the traditional lamp you want to replace.

How many lumens do you need?

The number of lumens you need for a room depends on a huge number of factors. Consider, for example, the size of a room, but also the shape of the room, the height of the ceiling, the colour of the walls, floor and ceiling, the type of lamp and so on. For the most ideal lighting you will often have to distinguish between general lighting and task lighting. With task lighting you can think of the worktop in the kitchen or the wash basin in a bathroom. Use the values ​​below as an estimate for the number of lumens you need for each room in your home.

Some rooms require extra light. Think for example of a store, a barber shop or a supermarket. Especially for the business market we have a range of Pro High Lumen LED panels. These panels, which you easily install with a Plug & Play system, give no less than 3,600 lumens with a consumption of only 29 watts. More than enough light output and an A ++ energy label due to the low energy consumption.

Are you looking for a replacement for traditional fluorescent lighting? Take a look at our range of LED fluorescent tubes. These simply fit into your current fixtures, so no installer needs to be involved. With the number of lumens, it is also not wrong. We have models from 850 up to 7,000 lumens.

Do you have questions about this blog? Do not hesitate to contact our LED experts. You can call us on +31 (0)85 303 0027 or you can send an email to [email protected]. During the day you can also directly ask your question via the Live chat in our shop.